For people interested in early retirement, or even self-employment after leaving a more traditional job, health insurance is one of the trickiest obstacles to figure out. With the costs of healthcare, it’s absolutely critical to have coverage, but our current system was completely designed around employer sponsored plans, which makes things harder for people trying to go on their own. For a more traditional retirement situation, Medicare kicks in at age 65 and you decide between the various options that are available, but what can we do between the time of leaving employment and age 65? While there are many different possibilities to consider, none of them are without some hang-ups, and on top of that the system is constantly in flux. Anything we look at today is most likely going to be different in the near future, so any decision you make has the potential to change before too long. There have been lots of political battles surrounding healthcare recently, but no matter what you believe, the reality is our current system isn’t sustainable with the way costs have risen. So what options are there, and what else needs to be considered?

Planning for the costs

Before we get to the process of sorting through various options, it’s important to think about costs and how that will fit in your overall plan. If you have good employer health coverage in your current job, your employer is most likely paying for a majority of the plan costs. Some employers provide around 50% and others go all the way to 100%, but on average the recent number has been around 70-80% covered by the employer. So, to provide a rough example, let’s say you are paying $150 per paycheck for family coverage and are paid biweekly, which amounts to you paying $3,900 per year for coverage. Since your employer is covering the other 70%, or $9,100, that could mean a total of up to $13,000 per year to pay for similar coverage on your own. OUCH! Depending on your lifestyle, this can be a huge additional expense on top of your normal spending, which is why it’s critical to have a good plan in place prior to making a decision to leave the workforce. This is also an important area to model different rates of inflation to see how they might affect your long-term plan because even small changes can have a big effect over a long time-horizon.

What options are available?

Even though things are far from ideal, and will probably shift rapidly, there are still many options to consider for coverage. Starting with your budget, as well as your appetite for risk, we can narrow down different plans to find something that will work.

This might seem obvious, but it’s the first place to look. If one spouse is continuing to work in a more traditional position, there’s probably an option to have family coverage. This usually costs quite a bit more than the single coverage plan, but it’s also significantly less than most of the other options you can look at, especially if it’s a high-quality plan. Another similar option to think about is moving from a full-time job to a part-time job that provides some benefits. Starbucks and Costco are a couple of larger employers that are known for this, but it’s becoming harder to find as healthcare costs continue to rise.

COBRA (Consolidated Omnibus Budget Reconciliation Act) is a law that requires a private employer with over 20 employees to allow former employees to stay on the health plan for a certain period of time after separation of employment. In general, this is to provide protection to employees that lose a job, but it has valid uses in other cases as well. The primary benefits are that it’s guaranteed and easy to get, and allows you to stay on your existing plan if you like it. The main downside is that it’s generally one of the most expensive options because the employer can pass on 102% of the cost of coverage to you. COBRA is also only a short-term solution because it generally is only available for 18 months after separation of employment (certain conditions can extend it up to 36 months), so it is mostly a stopgap measure until starting some other form of coverage.

Sometimes your current group plan will have options in it to allow you to extend coverage in some way after leaving employment. This could be a provision for early retirement to allow you to stay on the group plan, or a way to convert it into an individual plan. These types of plans aren’t extremely common, but it’s worth exploring what might be available, especially depending on your income level.

I’ve saved this one for last, but it’s probably the place a majority of people will end up. The Affordable Care Act marketplace, aka healthcare.gov, provides the greatest variety of options and potentially fewer drawbacks than the other choices. Each state has its own set of plans available, and an annual enrollment period where you can make changes or switch plans in a similar manner to an employer. There’s a wide variety of offerings from different insurance companies, with different levels of coverage depending on your needs and risk tolerance. Another benefit to ACA plans, and the reason they usually end up being cheaper for people in early retirement, is the ability to qualify for subsidies depending on your income level. The income limits to qualify for a subsidy vary by the number of people in your family, but go up 400% of the federal poverty level. Depending on the different account types you have planned to fund the early retirement, it can be possible to qualify for a substantial benefit to help cover the cost of the plan.

There are a few other options, but they tend to be on the more extreme end of things. Technically since the government mandate has been removed, you could self-insure and not carry any health insurance. This is a terrible idea! It could lead to financial ruin, so at the absolute minimum you should have a catastrophic coverage policy to provide some sort of backstop on charges. Another idea is to move abroad to a country that has more affordable health coverage, but that’s a total lifestyle change and comes with its own set of challenges. Finally, an option that has gained traction in the early retirement community is health share plans. While these are usually a cheaper option, they are NOT the same thing as health insurance and have some significant disadvantages to be aware of. Before going this route, you need to research and fully understand the risks associated with those types of plans.

Resources to find a path

Below is a flowchart that walks through the decision-making process and covers many of the options I’ve talked about here. If you end up deciding to look for a plan on the ACA marketplace, I like healthsherpa.com as an alternative to healthcare.gov. It has access to all the same plans available to you in your state but is easier to use and research specific plans if you have a certain doctor or prescription you need coverage for. It seems like our health care system is endlessly complex no matter what life stage you’re in, so it’s important to research and evaluate all options, as well as planning financially for the range of expenses you might face. If you need help thinking through a health insurance decision, schedule a complimentary meeting to talk through your situation. 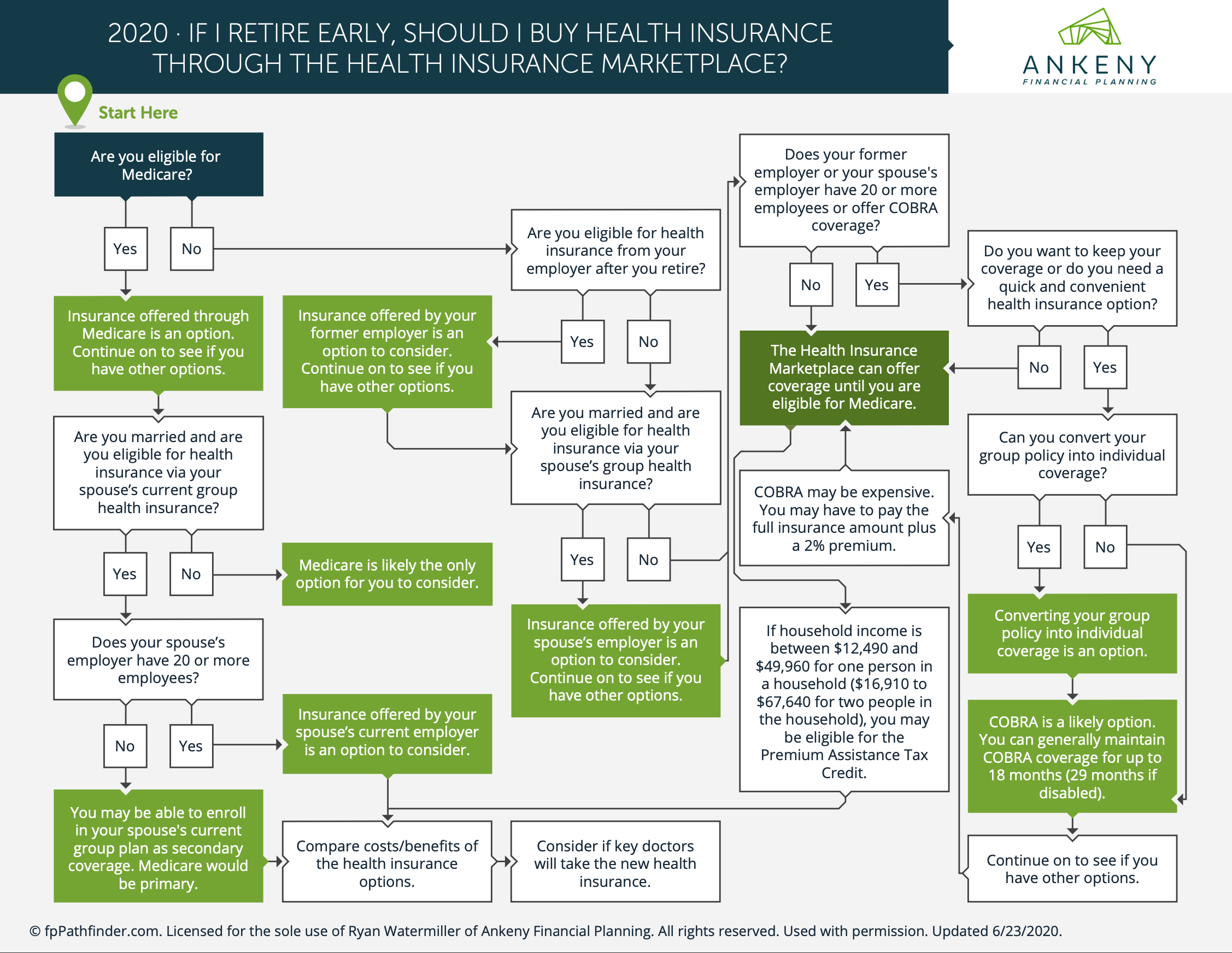